What makes one injector better than the next?  It's that age old question the plagues diesel pickup owners every where.  We let's see if we can help sort it out for you.  Maybe the best way to sort this out is to explain what makes most injectors fail.  The number one most common injector issue is contamination.  Gone are the days of old when you could run sludge through an injector and it would seem to just keep on working.  The new common rail systems used for the last ten years or so in the Dodge Cummins, GM Duramax, and Ford Powerstroke engines have a very low tolerance to any sort of foreign material in the fuel.  Whether it is water, rust, or some sort of dirt, this material passing through the injector wrecks them.  It basically sandblasts the seats and barrels that the injector plungers need to work against.  After a while the injectors do not have the tight tolerances needed to operate properly.  These systems operate in a range up to 27,000 psi.  There isn't much room for margins, things need to be exact for best performance. 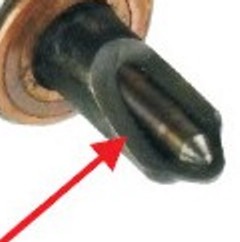 This contamination can not only lead to poor performing injectors, but can lead to broken injector nozzles like the one pictured here.  So what happens when someone has an injector failure like this?  They most often replace just the one bad injector.  Sometimes they replace the whole set.  These old injectors are then sent in to be rebuilt as cores.  Now we know if one injector has failed from debris being run through it, the rest of the injectors are probably damaged too.  An injector builder that is less than reputable or inexperienced may pass these functioning injectors through the rebuild process because they test ok after cleaning.  Then you get a "rebuilt" injector usually for a budget price.  These injectors will not last.  The market is flooded with them.  You will be installing an injector that is pretty much half or more worn out.

Now on the flip side, good injector builders like Alliant, Pure Power, Dtech, DDP, Industrial Injection, and others completely disassemble the injectors and hold all the internals to strict tolerances.  If the part does not meet a tight spec, it is replaced.  Most of the good injector builders are also replacing the electrical coil packs on the top of the injectors whether they need them or not as insurance.  This is a huge problem in the Ford 6.0 Powerstroke injector market.  The spool valves on top of the injector cause extreme hard cold starts and poor performance.  Unless you install a quality injector these problems just come right back.